As my husband says, it was a bit of a 'mizzly' day today - misty and drizzly. Or wet, in other words.  My morning had me striding out in knee deep grass to fetch some wandered sheep.  Though they turned out to be feral goats (in my defence, I didn't have my binoculars), I was nonetheless rewarded with a lovely view of an adult pair of sea eagles near Claddach loch.  This is as good a photo as I can share... 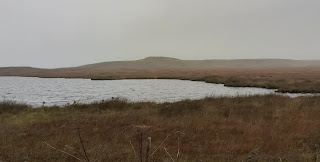 You can make out the 2 black figures above the loch. Not the best wildlife photo, I'll admit! But it does give you an idea of todays 'mizzly' conditions.

Lauren has given me today's count at RSPB Loch Gruinart - 7895 barnacles counted in the mist, 34 pale-bellied Brent, 29 white fronts, and one pink foot. Richard Belter this afternoon counted over 20 whooper swan coming in off the sea to the loch. While visiting birder John Overfield reported a Hutchinsii cackling goose among the crowds.

Happily I saved some sightings from yesterday for today.

Peter Roberts endured an other sea watch off Frenchmans rocks in the South-West of Islay - "I tried another sea-watch from Frenchman’s Rocks this morning in a moderate WNW. At least it wasn’t raining and the visibility was good, but, once again there was very little variety in what was seen. I was there for 2 hours (8.30 – 10.30) and had the following (all flying south): Auk sp (mostly Guillemots when definite ID could be established) – 495; Kittiwake – 456; Black-headed Gull – 2; Red-throated Diver – 4; Diver sp. 2; Wigeon – 11; Tystie – 2; Dunlin – 7; Grey Wagtail - 4.  There were also the local Shags, Herring Gulls and about 75 Gannets milling about. I’ve no idea why, but the auks were passing through mostly in the first hour (over 400 of the total) while the Kittiwakes mostly came past in the second hour (over 300 of the total)."

The Horwich Birders were also out and about yesterday:  "Walked up Gruinart side [of Ardnave Point] with groups of waders on ebbing tide - ringed plover 210, sanderling 20, turnstone 18 and chough 20 which is half what we usually saw in the past. Off the point overlooking Nave Isle at least 3 RT divers showing and 1 guillemot. A sea eagle flew in and perched on the island and later flew across over point and off towards Sanaigmore.  At Traigh Nostaig the usual piles of smelly kelp covered in starlings and gulls and there were 18 very vocal chough around.  Small numbers of waders,- oyks, dunlin, r plover, and 8  godwits (probably Bar T."  They continued their birding holiday today with a sparrowhawk at Ballinaby, and 2 WTE (one adult, one imm.) perching on separate islands on Loch Gruinart eastern side.  At Braigo a pair of stonechat, while at sanaigmore there was 18 chough.

More from today - a snipe and 15 twite reported by Tim Daley on the foggy Oa.  At Claddach, 7 chough plus 5 rook feeding on the beach. 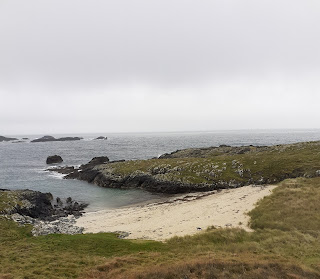