A dull, misty, but very mild and quite calm day, with drizzle at times in the morning, but brightening up a little in mid-afternoon.

A couple of records of summer visitors hanging on: A Chiffchaff seen by John Overfield at Caol Ila distillery and a couple of Swallows from Gary near Finlaggan.

I had a look at Loch Skerrols this afternoon with Mark Shields. There were tallies of about 45 Wigeon, 15 Tufted Ducks, 10 Mute Swans, 41 Whooper Swans, 15 Greylags and a quite high count (at least for Skerrols) of 190 Greenland White-fronts. There was no sign of yesterday’s Long-tailed Ducks at Blackrock – just a flock of 29 Common Scoter and 3 Slavonian Grebes. Back at Bruichladdich the large assembly of mixed gull species are still avidly feeding on the shoals of tiny fish in the shallows. Still no rarities amongst them, but it is fascinating watching them chasing the fish, darting about and being very successful in catching plenty.

Mike Hill had been out and about today and sent in this report:

Loch Indaal: Just round from Bridgend a White-tailed Eagle was spooking the geese and everything else. It landed a couple of times before catching something, probably a duck. It was joined by a Raven as it tucked into its tea.

Kilchoman: Back at the cottage we had a pair of Stonechat and a ringtail Hen Harrier. Two Chough went roost in the old church tower. We saw a pair do this last year, wonder if its the same ones?

Teresa Morris had also been active, but concentrated her time this afternoon after the mist cleared with 4 hours watching at Ardnave. She reports: 26 Chough, 17 Teal, 6 Whoopers flying up the loch from the sea, 1 Otter, 3 Seals, 28 Herring Gulls, 1 Snipe, 33 Dunlin, 7 Oystercatchers, 24 Turnstones, 12 Ringed Plovers, 14 Cormorants, 2 White-tailed Eagles over Nave Island, 40 Barnies in off the sea and a flock of 500 on a sandbar near Kilinallan (see photo below) and a total of 53 Red-throated Divers between Ardnave Point and Kilinallan. 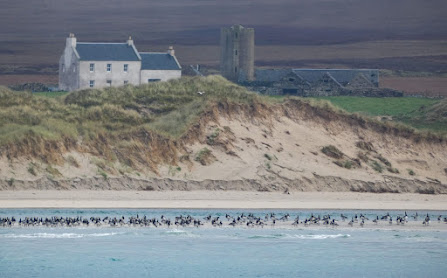