No, this image has not been digitally enhanced, but this single Barnacle Goose appeared last week, and I was fortunate enough to see it amongst a group of 54 Greylags this afternoon. After a while the Greylags started to harass it! Last night there was a "late" Corncrake calling here at our house, still going strong as I went to bed around midnight. If he finds a mate there still could be time to raise a late second brood. I.K.B.

Over at Loch Gruinart Reserve, an Elephant Hawk Moth was caught in the Moth trap, while some Cinnabar Moth caterpillars were also found today. J.R.H.

These Greylag Geese were round the other side of Loch Gorm today, about 70 in number, but definately being seen in different locations. Out at sea, here on the West of Islay, strong passages of Gannets heading South again, while on land in the heat of the day I saw a Common Lizard about 10-12 cm out sunning itself on the concrete at the door of a friend's house!
Posted by Ian Brooke at 21:19 No comments:

A Redpoll was at the hide at Loch Gruinart Reserve today. J.R.H.
We are now a Starling less after it was taken by a Sparrowhawk from the bird table and they both hit the kitchen window in the process. Two visitors to Islay watched a Golden Eagle being mobbed by 2 Buzzards giving them a great chance to compare the sizes of the birds together. M.A.B.
Posted by Ian Brooke at 18:19 No comments:

While out and about, we were fortunate enough to see several different birds of prey, female Hen Harrier, Peregrine Falcon, Merlin swooping onto and killing a Meadow Pipit. The Greylag Geese around Loch Gorm are spreading themselves through more fields rather than massing in one large group. Down on the beach there were 12 Dunlin and 22 Ringed Plover, along with a dead Gannet and also a dead Herring Gull. I.K.B.
Posted by Ian Brooke at 13:23 No comments: 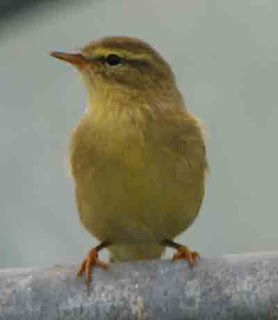 This willow warbler was in the poly tunnel catching insects, while its mates were making the most of what was in the garden! There are quite a few young Goldfinches out as well, while after some of the rain the young Blackbirds are busy probing for worms.

Out at sea, there have been sightings of numerous groups of Gannets returning South after their fishing trips.

Over at the mouth of Loch Gruinart, on the sand bar at the low tide, there was a group of around 50 Grey Seals loafing about, but not singing! I.K..B.

Whilst out and about, during the evening, we came across the grass field with the Greylag geese on it, the only difference was that now there are 163, and with 24 rabbits..... There were plenty of Stonehats and Whinchats around, while a male Hen Harrier crossed the road right beside where we were parked up. Saw our first Wheatear for a while too. There were 2 Greater Black backed Gulls out looking for carrion. M.A.B.
Posted by Ian Brooke at 08:26 No comments: 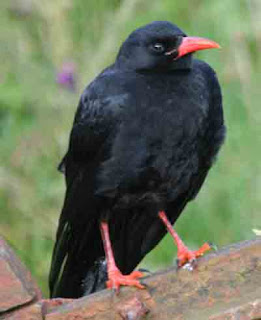 Whilst going round the sheep this morning, I saw this rather, sad dejected Chough down beside the old water wheel. I managed to get quite close to it and it did not make much of an attempt to fly away. I went out later on and there was no sign of it, so what became of it I am not sure. Gape worms appear to be having quite an affect on them this year. I.K.B.
There were over 90 Greylag Geese on one of the grass fields close to Loch Gorm on Sunday evening. A.MacT.
Posted by Ian Brooke at 09:55 No comments:

The good, sunny weather continues over here on Islay, while a lot of other places on the mainland are having heavy rain and severe flooding.
This morning on the overhead wires there were 52 Swallows, and on checking the artificial House Martin nest, I noticed that it was empty, so the 3 fledglings must have been successfully reared and flown their "nest". There were 3 young Grey wagtails in the garden earlier on, while on the nut feeders, there were 4 young Great Tits. I.K.B.
Over at Bruichladdich, a Mooorhen was spotted roosting in some Willows about 7 foot above the ground! G.J.
Posted by Ian Brooke at 19:37 No comments:

4 Greenshank were over at Gruinart today, the Redpoll was still around as well as 2 Moorhen. 2 Short-eared Owls were seen out hunting on Friday evening. J.R.H.
Here at home, there was a Willow Warbler, along with some young Blue tits over in the Willows in the garden. During the afternoon, there were 22 young Swallows on the overhead wires. I.K.B.
There was a report of a Basking Shark in Loch Indaal this evening. E.H.
Posted by Ian Brooke at 20:12 No comments:

Over at R.S.P.B. Loch Gruinart Reserve there was a Greeshank, as was a Redpoll. In the good weather, there have been good numbers of Blue tailed Damselflies. J.R.H.
Posted by Ian Brooke at 20:07 No comments:

A day for the youngsters.....
While coming back home from Bowmore, this afternoon, there was a young buzzard on top of fence post, and further along the road there were 3 young Ravens on top of a large rock, surveying all that was to be seen. Back home in the garden, there were young Goldfinches out and about, while earlier on we had observed a young Siskin on the feeders at a friend's house. Needless to say the camera was not at hand! M.A.B.
Posted by Ian Brooke at 20:09 No comments: 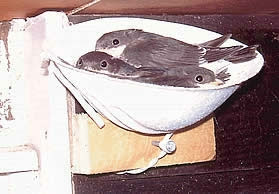 No, this is not our "rehoused" House Martins from here on Islay, but an image from down South taken a few years ago. The new nest was an inhaler mask, and did the trick with the fledglings successfully reared.
J.R.H. reports from the Scilly Isles, Marsh Harrier, Little Egrets, (we occasionally get them here on Islay too!), along with singing Blackcaps and Chiffchaffs too.
Posted by Ian Brooke at 08:51 No comments: 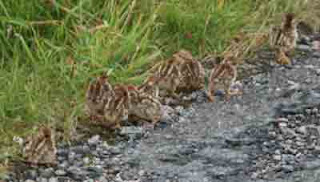 This image of 9 young Red-legged Partridge was taken along the roadside, just last week, so rather a late brood. Partridges here on Islay do not breed very sucessfully , mainly due to our high rainfall! The young House Martins whose nest fell down the other week, who we rehoused into another nestbox have been quite lucky, with 3 of the young still surviving. Another nest, fell down after the heavy rain on Friday night, but the young did not survive the drop from such a height. After the good day on Sunday, during the evening, the Swallows and the House Martins were noticeable swooping over the wood outside the house catching food on the wing. I.K.B.
Posted by Ian Brooke at 18:57 No comments:

Apologies for the lateness of the blog, partly due to my fault, and partly due to the fact that some of our contributors are away on holiday, J.R.H. in the Scilly Isles and R.A.S. on St Kilda!
35 Mergansers were observed at the mouth of Loch Gruinart. M.S.
Over on Jura, one pair of the Short eared Owls have successfully fledged 4 young, while down on the bay there was a sighting of Shelduck with a creche of 16 ducklings. Earlier on, in June, during a Sea bird survey between the North end of Islay and Colonsay, 2 Puffins were recorded. L.G. & G.M.
The Webs Count this week at Gruinart gave the following birds, 8 GBB Gulls, 2 LBB Gulls, 105 Herring Gulls, 22 BH Gulls, 151 Common Gulls, 1 Little Gull, 35 Curlew, 2 Whimbrel, 84 Bar Tailed Godwits, 268 Oystercatchers, 47 Eider Duck, 9 Knot, 16 Dunlin and 1 Peregrine Falcon. The Peregrine was later seen taking an Oystercatcher, so should the count read 267?
There has been a regular sighting of a Tawny Owl over at R.S.P.B. Loch Gruinart reserve. C.F.
Out and about on Islay there have several sightings of Raven out with their young. S.McG.
Posted by Ian Brooke at 18:46 No comments:

Over at R.S.P.B. Loch Gruinart Reserve helping with the guided walk in the morning. The first bird to be seen was a Short eared Owl out hunting, and soon after a male Hen Harrier quartering its patch. Down on the estuary, there were quite a few Shelduck about, but again not a lot of ducklings with them. In the afternoon, I was out trying to locate the Stone Curlew that had been reported again, but to no avail! M.A.B.
There was a sighting last week of a Black Redstart down on the Rhinns. J.S.A.
Posted by Ian Brooke at 08:03 No comments:

Great excitment at the home today, as one of the House Martin nests had fallen down on the ground with 4 young. After the initial panic, the problem was easily solved, but would it be successful? The remedy was to use an articial Marin nest, which we had not erected, and place the youngsters in it and hope for the best, we could not site it on the eaves but placed it securely on the window sill. By the looks of it, we have been successful as there are plenty bird droppings now by the new nest and several gaping mouths waiting to be fed. Hard to really establish whether we have 3 or 4 yougsters. M.A.B.
Posted by Ian Brooke at 10:39 No comments:

Out today with George Jackson, for a welcome spot of bird watching! Several Gannets on the move out at sea, with a Sedge warbler heard being very vocal in an overgrown ditch on the roadside, but too elusive to be seen! Plenty stonechats, whinchats, wheatear, both adults and young were abundant in numbers. Skylarks were heard singing away in numbers up at Sanaigmore, as were a few Curlew. On the water there, were a few Eider along with youngsters. Meadow Pits were out and about with grubs for their young. At the end of our trip we commented on the lack of Harriers, a solitary Buzzard sat on a telegraph pole was the only raptor seen, no Owls either at all. G.J. and I.K.B.
Posted by Ian Brooke at 10:29 No comments:

Islay chough summary, 2007
There are currently 50-53 nest sites occupied on Islay. Of theses nest sites, only around 30 pairs bred successfully. It has been a mixed year overall, with some pairs rearing large broods, up to 5 young, but others struggling to feed their young and losing part of or the whole brood during the nestling period.
The young choughs, of pre-breeding age, are at present in 2 flocks here on Islay at the moment. Around 65 - 70 can be seen at Ardnave peninsula and 25 - 40 around the Machir Bay area. At this time of year, the flocks of young birds are also joined by adult pairs with their recently fledged chicks. These noisy families are usually easy to spot as the fledglings are often following the parents relentlessly, begging for food! M. McC.
Posted by Ian Brooke at 10:15 No comments:

A Merlin was seen to be acting oddly in a garden over at Ballygrant, it had got a blackbird shouting off its alarm call from within a bush. The Merlin responded, by coming in to land on its perch, sourced the blackbird and took off, smashing its way into the fuschia bush, but to no avail with the blackbird flying off unscathed! S.McG.
The weather here on Islay has gone downhill, now that we are in July. We only had 3.5" of rain in June, mostly in big falls overnight followed by nice suuny days, a big contrast compared to the flooding endured and ensuing damage done to property over on the mainland. So today it is rather dreich outside, with not much sign of many birds on the wing, although the young Choughs from the roost were quite vocal earlier on, as is their norm, they cannot go about quietly! I.K.B.
Posted by Ian Brooke at 11:29 No comments: