Barn owls and also Tawny Owls were seen out hunting over at R.S.P.B. Loch Gruinart Reserve, while 2 lizards were seen out sunning themselves during the day. There have been several sightings of Adders around the island, during this spell of sunny weather! Also over at Gruinart, 3 of the Hen Harrier broods were rung with a total of 7 fledglings, apart from the normal metal B.T.O. rings, they also have a white plastic ring with black lettering, the female has its ring on the right leg while the male is on the left leg, so if you see any of them, please let us know. J.R.H.
Down on Loch Indaal, there was a good sighting, close inshore, of a Great Northern Diver. G.J.
Also on the other side of the Loch, there were 4 Red Throated divers, and a Peregrine Falcon while on an inland lochan there were a pair of Whooper Swans who may now be here the whole summer, having missed out on the Spring migration! G.D.Y.
Here at home, this afternoon, I watched the Peregrine high up, flying with the Swallows, nobody taking any notice of either party! M.A.B.
Posted by Ian Brooke at 15:14 No comments: These are 2 of the young owls that were rung last week.
This morning, on the bird table there were 12 young Starlings, while on other occasions we have had young Greenfinches trying to get their parents to feed them. I am not sure whether we are right to feed through the summer months, but it certainly makes life a lot easier for the adult birds, if there is a really good source of readily available food to feed the emerging brood.
Whilst out today we saw 2 male Hen Harriers flying together within 25- 30 yards of each other, and certainly flying together, rather than one bird trying to see the other off. There was a group of 5 chough at one place and another 3 further along the coastline, possibly still family groups together. I.K.B.
George has just returned from a few days over on Mull, where he had some spectacular views of the Sea Eagles, but unfortunately did not have his big lens on his camera when they were really close at hand! He also had a Turtle dove over at Ardbeg before going away, possibly the same one that was at Kinnabus. Andy is away to St Kilda, so I wonder what he will see out there.
Posted by Ian Brooke at 19:34 No comments:

An evening walk on Friday, up the River Sorn from Bridgend was very productive. First of all was the Otter, 23 Pipistrelle Bats, along with 3 Daubenton's Bat, not bad going! A dipper was seen, as was 2 Woodcock and 2 Barn Owls. Several Roe Deer were also observed. It was on this walk last year, that a Sparrow Hawk was seen taking a Pipistrelle Bat! P.T.B.
On the way back from Port Charlotte, this afternoon, a snipe flew across the road in front of us, a Golden Eagle was close at hand, no need for the bins for an ID, and 14 Curlew on a silage aftermath field. I.K.B.
Posted by Ian Brooke at 18:10 No comments:

Hold my hand up for the wrong ID of the gull in the previous entry, it was a Herring gull, not a Common gull!
The Barn owl that I told you about in an earlier blog that laid 7 eggs, a record number for Islay, well 5 of the eggs hatched and were succesfully reared. Although one of the chicks was a little smaller, it was well fleshed when it was rung along with its siblings midweek. No cannibalism here on Islay in the nest, compared to the BBC Springwatch owls down in Devon! In the same vein, our swallows here at the house, were hatched on the same day, and fledged on the same day as the Devon swallows, with 4 fledglings here.
The shelducks at the top of Loch Indaal at Carnain, do not appear to have many ducklings with them, so have they been predated already, thinking of how quickly the brood of 4 on Springwatch soon became a solitary duckling!
A basking shark was seen from the ferry close to Colonsay on Wednesday.
There is a good showing of flowering foxgloves as well as honeysuckle too.
Over at R.S.P.B. Loch Gruinart reserve, there has been several sightings of an Otter from the hide. 4 Black tailed Godwits and a shoveler with 5 young were also seen. Up at Ardnave Loch, a Tufted Duck was seen with 2 young. There have been several sightings of Short eared Owls reported this week around the island. Down on the Oa, 3 Swifts were seen and a Turtle Dove was at Kinnabus. A Dipper was on the small burn in Port Charlotte too. Pied Wagtails are out in force carrying grubs etc back to their ever increasing (in size) youngsters, as are the Swallows and House Martins here at home. I.K.B., G.K., J.R.H., P.Y.
Posted by Ian Brooke at 07:57 No comments: 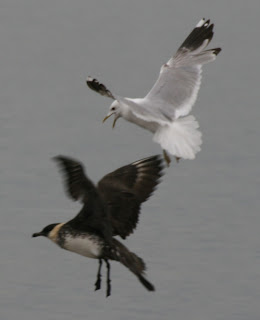 This an image sent to me by George Jackson of the Pomarine Skua which was seen earlier on in the week off Bowmore, obviously being asked to move along by a Common Gull!
The reason for the image of the Oystercatcher, in the previous blog, was that I saw one from my bed in Paisley! Does anyone out there know the poem about Magpies, as the maximum number I saw was 13, so any offers please?
Also whilst in the hospital, Louise was on holiday in the Lake District, okay for some... She had the pair of Osprey on Bassenthwaite as her top tick, along with Nuthatch, Treecreeper, Ring ouzel, Gooseander and Redstart. Back home on Jura, there are now quite a few Short eared Owls being seen, a pair of Great Northern Divers in courtship display with their synchronised swimming etc! L.G. & G.M.
Back on here on Islay there was a reaaly good sighting of a pair of Red throated Diver. D.B.
Posted by Ian Brooke at 11:32 No comments: 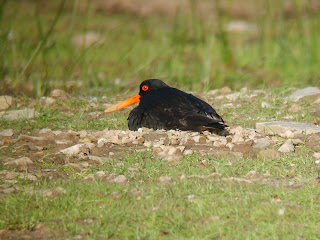 The Blog manager is now back in residence, although he has kindly allowed me to up date the blog tonight.
Tuesday 12th June: An early start, as in Midnight allowed good counts of cornrake at Gruinart, as well as 2 spotted crakes, 1 water rail and a grasshopper warbler (JRH). Later, on the Oa, (AK) had a good day, recording 2 swifts off the cliffs, a spotted flycatcher, siskin and best of all a narrow bordered bee hawkmoth!
Wednesday 13th June: Another corncrake survey on the Island last night, with over 30 calling birds recorded in the one survey. Also 3 spotted crakes calling at Gruinart. Later from the hide at Gruinart a green winged teal was present also on the reserve was a mute swan with 6 cygnets and a teal with 5 ducklings (JRH).
Thursday 14th June: Colder and windier day, the birds were very quiet, good views of hunting hen harriers and short eared owl at Gruinart (JRH)
Posted by Ian Brooke at 17:14 No comments:

Latest news from our Paisley correspondent is, 13 magpies and 2 pigeons from the hospital window, that's probably more magpies than have ever visited Islay.
On Islay there has been evidence of bird movement, with some good records.
On the evening of the 6th June a Stone Curlew (MC) was spotted at Ardnave, although searched for on the 7th, it was not seen again. Also on the 6th a Little Stint (JH) on the shore of Loch Indaal.
7th June: Produced a Blue Headed Wagtail (JRH) near Lyrabus on the road.
8th June: First Painted Lady Butterflies were seen, plus a Poplar Hawk Moth at Gruinart. Marsh Fritillary Butterflies have been reported from many sites all over the Island, it looks like it's going to be a good year for them.
10th June: A Pomarine Skua (GJ) was seen in Bowmore habour, being mobbed by Black Back Gulls, also 2 Red Throated Divers on Loch Indaal and a Spotted Flycatcher at Gruinart.
11th June: The Blue Headed Wagtail (JRH) still present on the road near Lyrabus, Gruinart.
Posted by Ian Brooke at 17:12 1 comment:

The rain stopped and the sun came out, the weather must know when Spring watch is being broadcast.
4th June: Dunlin displaying at Gruinart (JRH) and 6 Yellowhammers around the Killinallen area (MS)
5th June: A male Gargany at Gruinart (AS) and also an Arctic Skua flying north over Loch Gruinart (BBC). On the Oa a swift was seen flying in off the sea (AK), I think this is the first of the summer.
6th June: A walk at Gruinart revealed 2 reeling Grasshopper Warblers, 3 Whitethroats, 2 Whinchats and 6 Stonechats (JRH). At Killinallen there was a single Bar Tailed Godwit in winter plumage (JF).
Posted by Ian Brooke at 17:33 No comments:

Ian is temporarily out of order, but still recording for the blog with a report of 6 magpies from Paisley Hospital ward window.
We will endeavour to keep the Blog up to date with the latest stunning reports from the Spring Watch Island in the sun (well its raining at the moment).
30Th May: The Orchids are coming into flower at this stage mostly Heath spotted, and Early Purple (at Ardnave). The Hen Harriers are more active now with the young starting to hatch, and several Short Eared Owls have been seen.
31st May: We had a report that the last goose, the Gruinart Barnacle had succumbed to much grass. A Quail was heard during evening sound recordings by the BBC on the Gruinart flats. Also calling at Gruinart in a fine medley of wet grassland bird song were 2 Spotted Crakes, 4 Water Rails and an ample supply of Corncrakes as the chorus.
1st June: A corncrake count on the South Rhinns produced few Corncrakes but 5 barn Owls
2nd and 3rd June: Too much rain for birwatching!
Posted by Ian Brooke at 15:37 2 comments: