Yesterday's star finds were all still present today, according to reports.  Todays addition is the red-breasted goose seen by Peter on the Gruinart flats.

Today was definitely an eagle sort of day, going through the WhatsApp group.  The majority of activity occurring on the islands off Ardnave Point, pictured above (Teresa Morris).  These are an other important grey seal breeding location. There must be plenty of carrion to be found now we're coming towards the tail end of the breeding season.

Golden Eagle seen this morning on the drive to Ardnave by John McTague, then 4 sub-adult white-tailed eagles off Ardnave Point around Eilean Beag.

Neil McMahon had one WTE just south of Bowmore this morning, and he outdid John's record with 5 WTE on Nave Island in the afternoon. Then 3 golden eagles over hills east of Loch Gruinart at lunchtime.

Teresa also visited Ardnave and had a golden eagle and WTE in the dunes to the west of the farmyard (photographed).  She also noted the imm WTE on the islands off the point. 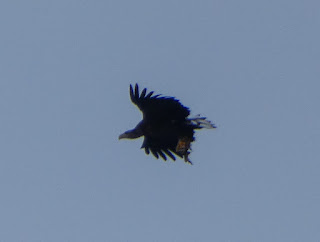 Dan Brown has gotten in touch while he's over leading a birdwatching group. This evening as they arrived, they had a golden eagle attempting to dispatch a greylag goose in a field just outside of Port Ellen, seen from the roadside, and a WTE flew over to check it out.  As they were leaving Kennacraig they counted 5 WTE and a golden eagle.

Around lunchtime today I too had my eagle fix: a golden eagle with a buzzard by the mast outside Portnahaven village, flying towards Rhinns Point.

Becky Christie has kindly shared some lovely images of a rather beautiful snow bunting which her young sons Luke and Cameron took while they were at Saligo bay yesterday. 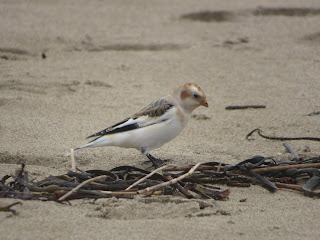 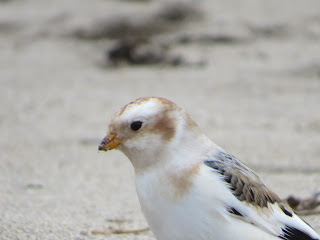 Thank you all for the contributions.