A late report for yesterday from Mary-Ann Featherstone and visiting friend Bob Brown of 60 Choughs at Ardnave at around 5pm.

Heavy rain and strong winds at times into early morning today, “brightening” to dull grey and occasional drizzle for much of the rest of the day, though better still with sunny patches and lighter breezes by the evening.

The weather obviously put some folks off venturing too far, so fewer reports today. My contribution was stopping on Loch Indaal at Carnain at high tide this afternoon to count the Barnies (2,750) and check for oddities (none).

Visitor Kate was up at Ardnave at 4pm and had 30 Choughs, lots of Greylags and Barnies plus a White-tailed Eagle.

Teresa Morris ventured to Loch Skerrols after the rain eased up this afternoon counting 83 Wigeon, 24 Teal, 12 Mute Swans and 45 Whooper Swan  - plus a White-tailed Eagle.

However, the “professionals” (aka RSPB staff) had been out doing a reserve goose count this afternoon. The good conditions and very settled geese in the fields allowed for the following totals:

Also noted was a leucistic Barnacle Goose on Flats, plus 2 Hen Harriers (1 juv male and 1 female); 2 Sparrowhawks; 1,275 Golden Plover on the Loch; Just 6 Whooper Swans and on the Loch a flock of 151 Wigeon and 13 Pintail.

*SO: The Red-breasted Goose is still with us, albeit elusive. An incentive for us “fair-weather” birders to get out and look harder over the next few days regardless of rain and wind!

AS AN ASIDE: My quick count of 2,750 Barnies today at Carnain had me thinking of how tricky it is counting the entire island wintering population of 30-35,000 or so – hence my reference to the RSPB staff and other goose-counters as “the professionals”. But these numbers (of birds from the Greenland/Iceland population) are small compared to those in continental Europe migrating from Svalbard and Arctic Russia. This week’s BirdGuides News reports an incredible single day count of 134,760 Barnacle Geese logged passing Cape Põõsaspea in Estonia on 13th October. This included a single flock of 11,520. Other huge counts recently have been On 20 May 2018, when 113,442 Barnacle Geese were counted past Rottumeroog in The Netherlands. The record however goes to the staggering 401,000 counted migrating past Gökalv, Blekinge, Sweden on 14 May 2017. 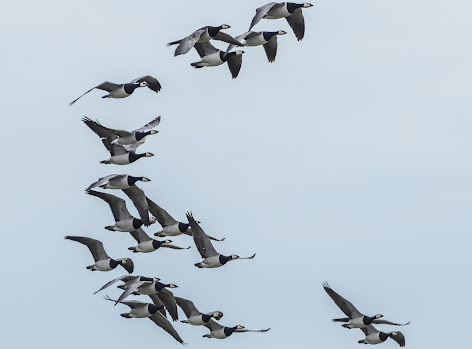