Visitors Dave & Sian Nevitt sent in a few notes from yesterday including 10 Icelandic Redwing at Bunnahabhain, and 10 Bramblings on the Glen Road.

They returned to the Glen Road today and had 3 Golden Eagles together, Peregrine, Red Grouse and a couple of Choughs.

Brambling was on the radar again today with Mary-Ann Featherstone seeing a couple of flocks of c. 30 and 20 up at Kildalton, plus 5 or more lingering House Martins.

Gary Turnbull was watching at Finlaggan today finding a Snow Bunting near Finlaggan House, a Golden Eagle over the hills to the west of the loch and a total of 9 Buzzards over the hill ridges along with Sparrowhawk and Kestrel.

Mary Redman had a White-tailed Eagle over Portnahaven this afternoon, so they are still roaming widely across the island.

There were 35 Ringed Plovers and 4 Sanderling on the beach at Machir Bay this morning.

"Bird of the Day" goes to Lance Degnan who found/re-found a small race Cackling/Canada Goose out on the Gruinart Flats from the Visitor Centre in the early afternoon. Presumably the same bird was seen by James How along with 4 Brents, 19 Whooper Swans and a Pink-footed Goose all amidst the Barnies on Loch Gruinart. James managed to get a photo of the Cackling Goose (see below), which is very timely as Jim Dickson, the Argyll Bird Club Recorder reminds us that the small Todd’s race of Canada Goose and the now fully split species Cackling Goose all need close attention, a description and ideally photos, as they are British Birds Rarities Committee species. It is a pity that several are recorded each winter on Islay but some sightings have to be “binned” as there is no supporting evidence accompanying the observation. 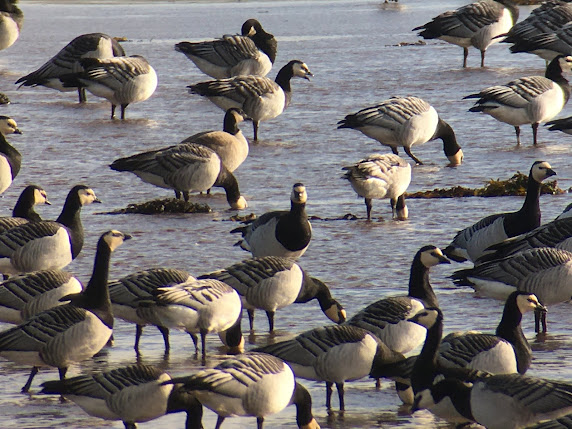