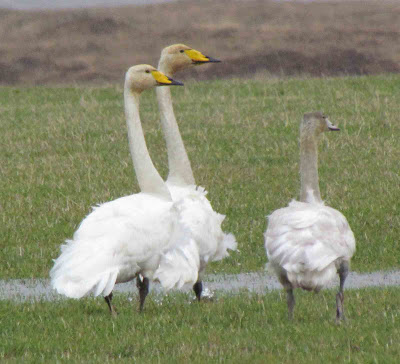 This family of Whooper Swans were caught on camera down below the Coastguard cottages this morning. What is not so clear is that the wind was already quite strong and if you look more closely, the feathers are quite ruffled, also the water getting splashed about too! The wind since then has certainly increased. Both Machir Bay and Saligo Bay had some "white horses" on the waves this morning, but around 4pm, all that could be seen was just a mass of "white water". Just as well Calmac cancelled the ferries out! There were also 2 large flocks of Golden Plover later on, down in the same field as the Whoopers had been in this morning.
Yesterday, down at Bruichladdich, Carol Ogilvie had counted 21 Pale bellied Brent Geese, and Malcolm at 8.30 am today counted 10, which were 6 adult and 4 juvenile birds. I counted 21 this morning getting buffeted about between Uiskentuie and "the spit", no wonder some folk refer to them as "storm geese".
Margaret Formby had seen a couple of Waxwings on her way home yesterday, eating some berries at "Puddlehole", on the road between Bridgend and Mulindry.
Posted by Ian Brooke at 19:13