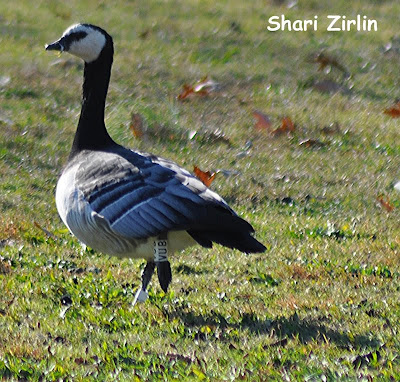 This image of a Barnacle Goose was sent through tonight from Steve Percival. It was taken yesterday morning on a beach on The Bronx, New York by Shari Zirlin. The Goose itself was one rung by Steve back in November 2002, and was last seen on Islay in 2005, but Steve assures me that its mother and some of its sibling are still up at Ardnave! Must have taken a wrong turning somewhere and not returned to Islay... Possibly prefers city life to here!
Carl yesterday had Woodcock at Octofad, Snipe at Lyrabus Croft and Loch Gruinart, a male Hen Harrier at Rock Mountain. Down at Bruichladdich, Redshank, Purple Sandpiper and Ringed Plover were present. Back home at Port Charlotte, a Sparrowhawk was seen eating a male Blackbird!
Apologies for the late entry, but better late than never!!!
Posted by Ian Brooke at 23:19

The Barnacle Goose has been relocated, this time in Connecticut.
http://ctaudubon.blogspot.com/
Sincerely
Shari Zirlin