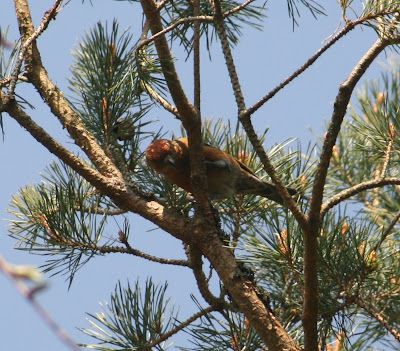 This image of a Crossbill was taken last Saturday by Tony Johnson up at Bunnahabhain, while he was putting off time while waiting on the afternoon ferry! Thanks Tony.
The Ravens up on the cragg have fledged their young today. There appeared to be 3 youngsters out, with great consternation by the Lapwing trying to move them on. The Rock Doves were agitated too as were some of the Fulmars. James commented this evening about the young Ravens also fledging on the reserve today as well, and with 3 young too.
Looking from his house today across Loch Indaal, Carl had Fulmar, 3 Red throated Diver, a few distant Auks and small numbers of male Eider. Off Uiskentuie Strand, 12 Red breasted Merganser and 1 Great northern Diver in summer plumage, with Little Tern, Dunlin, Sanderling and Ringed Plover present on the shoreline.
Bruichladdich held small groups of Dunlin and 5 Turnstone, while on the rocks 2 Arctic Terns were noted.
A Barn Owl was seen late last night by one of our friends on their way home. Earlier on this week they had seen a couple of Pink footed Geese amongst some Greylags round at Ballinaby.
Posted by Ian Brooke at 20:52