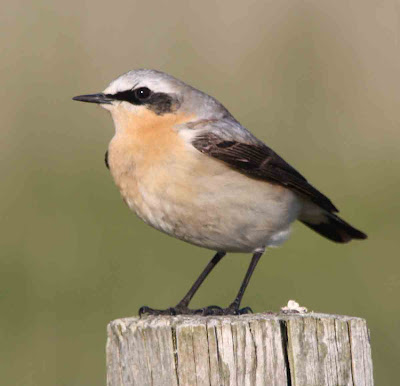 A better day over here today, and the temperature is back into double figures again!
Caught this Wheatear round Loch Gorm this evening. The number of times I have tried to get an image of one close at hand but with no luck. But tonight this one decided to sit on the post and not fly off as they normally do... There were 3 Greenland Wheatear in the barley field round at Ballinaby and several Northern Wheatear were seen on our way round Loch Gorm. A few more Stonechats were present, and at Rockside road end there were 44 Linnet. Back at home over the past week, there have been more Goldfinch present and a few Greenfinch too.
George had 12 Great Northern Diver displaying on Loch Indaal yesterday in front of his house. Today he had 5 Turnstone, in full summer plumage, down on the shoreline and a late pair of Shelduck looking for a possible nest site. George also saw 3 Ringed Plover chicks scurrying about. George had a Redpoll, while he had his first Greenfinch for the year on his bird table. Another returning bird to his table was the Lesser Black backed Gull, it normally returns in June but is early this year. George reckons that this is the same Gull which came first of all back in 2005.
Posted by Ian Brooke at 19:57