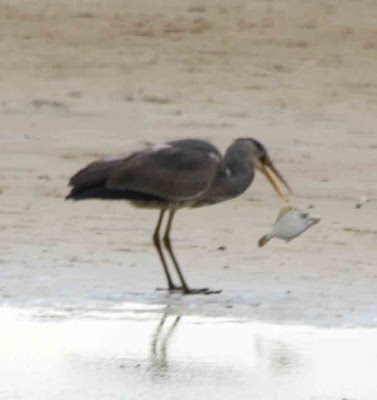 Not the clearest of images, but you will get the general idea behind it all. The Heron was having a bit of a problem in trying to eat the poor fish, so it eventually dropped the fish out before eating it successfully at the second attempt. Any thoughts of what kind of fish?
Carl today had 18 Sanderling and 2 Dunlin down on the Uiskentuie Strand. Later, on the ponds on the left hand side after Newton there was a drake Shoveler and a few Mallard present.
Posted by Ian Brooke at 21:23