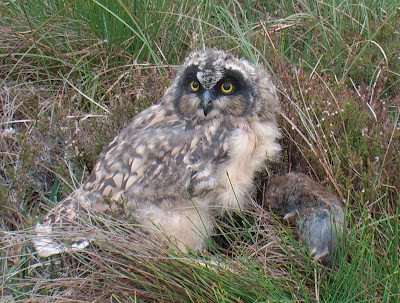 This image was sent in tonight by a visitor who had managed to catch on camera this recently fledged Short eared Owl along with its prey of a short tailed vole which been brought in by the male bird.
Margaret has been keeping a close eye on the Owlcam, but has nothing more to report, there still appears to be only the one young Barn Owl. Mark from the Trust had said that the female had been off the nest at one point, and the 3 eggs were still visible.
Posted by Ian Brooke at 21:57