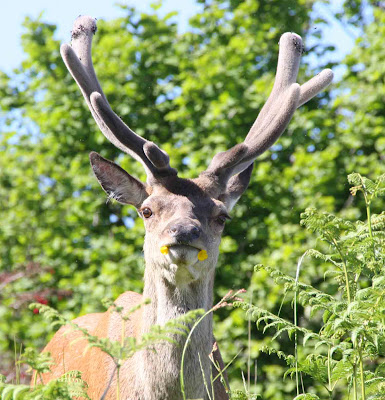 As the day was so good yesterday, "just pure dead brilliant", we headed over to Jura for the day, with the camera too! The number of times that we stopped to look and take in the views and to take yet another image, well...
This stag was less than 5 metres away and not really bothered by us, and no I did not "plant" the buttercups at either side of his mouth! You can just see the flies on the tips of his antlers on the velvet. It was just as well we went yesterday, as today the weather was not so good!
Yesterday James had a Short eared Owl on the reserve at Gruinart, heard a couple of Cuckoo calling and saw 20 Common Tern on Loch Gruinart itself. With the good weather there were Marsh Fritillaries on the wing. Today, he saw a Red Deer with a young newly born calf at foot. James also saw a Narrow bordered Bee Hawkmoth.
Last night Michal had been out on the prowl again and heard a couple of Corncrakes calling in the Ballygrant valley. At Ardnahoe he had a Tawny Owl and also a Barn owl near to Kilmeny.
Posted by Ian Brooke at 21:26