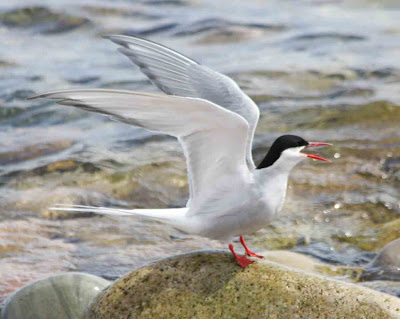 Whilst out showing our friend from Oz round Islay today, I was fortunate to capture this Arctic Tern down at Claggain Bay. Also on the shore were several Oystercatcher and a few Ringed Plover. Out on the bay were 2 male Eider Ducks, a Cormorant and 2 Mergansers.
Over at Gruinart this evening Rory had a Corncrake walk, we heard 2 separate birds calling, and it was not until we were returning to the Visitor Centre that we were fortunate enough to actually see one.
On the flats yesterday, James had 3 Greenland Whitefronted Geese and 2 Whimbrel. Today he reported that there were 9 Corncrakes calling in total on the reserve, and that he had a Water rail and later on a Barn Owl. Michal told me that there have been over 30 birds heard on Islay so far, and hopes to commence an Islay census within the next few nights. So not much sleep for some, as it is done after midnight through to 3 am on a calm night! JRH & MS
Posted by Ian Brooke at 21:14