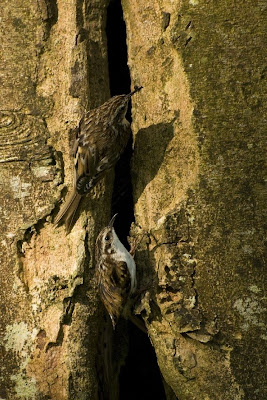 Michal sent me through this image of a pair of Treecreepers which he took at the weekend. Also through the weekend, he had been over at Bunnahabhain where he had seen a Yellowhammer, and also a male Bullfinch as well as some Redpolls in the forestry.
Round at Ballinaby tonight, there were 24 Dunlin and 8 Ringed Plover in a ploughed field that is waiting to be sown yet. There had been 18 Ringed Plovers in another field over there last night.
Some of the RAFOS group today had been watching Otters over at Claggain Bay, while other members had seen a few Red Grouse near to Beinn Bheigier.
Posted by Ian Brooke at 19:29