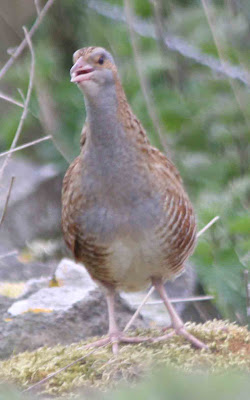 Not another Corncrake, no it's just possibly the same one that posed the other day, but this time at 8.15 in the morning! He was calling away looking for a mate. Last night when he was quiet, I put it down to being rather windy, but this morning it was as windy, so that knocked the idea on the head that they are normally quiet when it's windy!
Catherine gave me some figures from a count that she had done on Loch Gruinart on Tuesday, all done on the west shore, 234 Dunlin, 49 Ringed Plover, 57 Whimbrel, 8 Arctic Terns and 3 Turnstone. Catherine also said there more Terns further out but positive id of them proved difficult. Over on Nave Island, there were 7 Brent Geese and also 2 Barnies seen. Along the road between Gruinart and Ardnave, she had seen the following raptors, Kestrel, both male and female Hen Harriers as well as Buzzards. CF
Posted by Ian Brooke at 20:47