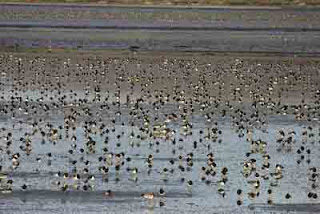 Another great day, has Spring arrived early? To cap it all some Frog Spawn was found in a ditch in Glen Astle on the Oa, this must be early. Also on Glenastle Loch there were 15 Tufted Duck and near the actual loch on the ground were several Rock Pipits. Over on the Rhinns, close to Claddach at Portnahaven, a single Grey wagtail was spotted along with 2 Pied wagtail. S.A.
Also yesterday, 12 Whooper Swans were seen flying over Bruichladdich heading north. G.J.
The above image was taken this morning by Malcolm Ogilvie and it shows the geese resting up after feeding all night by the light of the moon.
Posted by Ian Brooke at 17:08