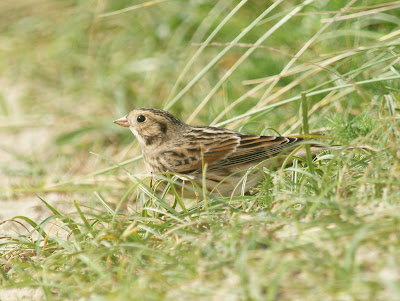 An image given to me today of a Lapland Bunting taken this morning down on the Machir Bay by the same visiting birder. Also at Machir Bay there had been an Osprey, heading inland. Over at Gruinart, and he had seen the American Golden Plover again, as well as a Little Stint, Curlew Sandpiper, Greenshank and Whimbrel.
This morning George had found a 4 foot long Conger Eel down on the shore below his house at Bruichladdich. It would have been longer but it was missing its' head! George left it down on the shore, with a couple of Greater black backed Gulls claiming it, and they managed to defend "their prey" against a couple of Ravens! Later on and George had seen a Greenshank up at Gruinart and a female Pintail along with a few Shelduck.
Carl yesterday had 8 Basking sharks off Easter Ellister and also a Peregrine at Carn.
This evening, the weather looks like as if it is going to break down, the wind is picking up a bit too!
Posted by Ian Brooke at 18:06