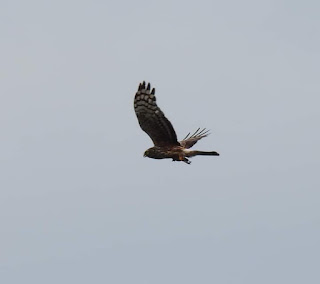 Ring-tailed hen harrier over Keills yesterday, clinging tightly to its lunch! Thanks Billy as always for the photo.

An other autumns day in summer today, although it was warmer for sure the wind just didn't let up all day. Just beyond the lighthouse island Orsay over a dozen gannet were flying close to the waves.  The Arctic terns are still very active and noisy and a smaller group of 8 or so came over the 'wee beach' in Port Wemyss to check us out. Something else I have noticed at Claddach is the resident gull colony are more frantic in their morning hunt for scraps. A tradition at the croft that has gone on for decades, I still throw them a couple heels of bread when I have it. Often it is just a couple of herring gulls and maybe 4 common gull at most. But the gulls are waiting for me lately and 'begging' for the food.  I've not known them so hungry before.