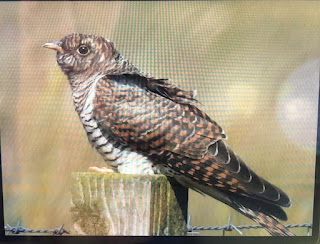 David D took this photo of a juvenile cuckoo near the Oa carpark. Instinct is an incredible thing, to be raised by meadow pipits but to 'know' they are cuckoo; to migrate and go onto lay their eggs in other birds nest without any of it learned from a parent...amazing!  When I was young, my parents hatched some ducklings from under a hen. She was most distressed when they leapt into water every chance they got, the instinct too strong to ignore. The same cannot be said for the chickens hatched out under a duck.

This evening at Claddach, a peregrine was being seen off by resident gulls. Similarly this morning a buzzard was being mobbed by a pair of herring gulls. A pair of lapwing were in the fields near the house.  out at the gulls, wheatear, rock pipit, meadow pipit, greylag geese, and gannet off shore.

The unavoidable subject of avian flu is on everyones minds. The local charity 'Islay Development Initiative' among many things, clean the beaches. Today from just around a quarter of the The Big Strand they collected 168 birds (mainly guilliemots).  As ever the advice is do not touch or intervene. Report any suspected cases to DEFRA 03459 335577.