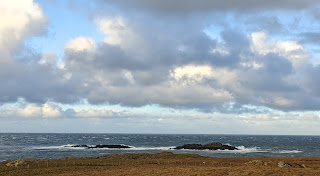 Pinch and a punch for the first of the month!  A view of a relatively calm Frenchman's Rocks above.  December came in with a blast of wind which did die away as the day went on.  The rocks feature often in the blog as an important vantage of the main migration route of autumn and spring birds.  In the summer they provide an amazing spectacle of hundreds of feeding gannets diving into the fast running waters that race between them and Islay.

Steve Lister found the cackling goose near the RSPB Loch Gruinart visitor centre, and it was later picked up by Chris in the same field. To the west of the reserve, Chris spotted 2 WTE and a male hen harrier hunting.  While he was on the Oa he noted a juv WTE, a ring-tailed hen harrier, and 50 twite, then near Bridgend he found 2 golden eagle showing well.

Gary reported a greenshank below the power station at Bowmore, and a juv. Iceland gull.