With regard to yesterday’s note about the concern over bird flu reaching our wildfowl populations on Islay, the RSPB have said the following: “We are monitoring the geese on the reserves closely. So far we have not seen excess deaths, in fact there are rather fewer dead and injured geese than is usual for the time of year. However, this is a developing picture and we have to be vigilant and ready to respond if things change. It is usual for us to leave birds where they are unless they become a hazard or numbers become high”.

It was another fine day – calm and sunny throughout. Visitors Geoff & Natalie had been to Islay’s highest point (491 metres) yesterday at Beinn Bheigier and seen a Snow Bunting up there.

Today Gary had been out and noted a few Goldeneye on Loch Ballygrant and a Great Spotted Woodepcker in the surrounding woods.

I took advantage of the wonderfully flat-calm sea on Loch Indaal this afternoon to do a count of birds at Bruichladdich Pier and then at Blackrock. Results were:

James How had 3 White-tailed Eagles, 1 Greenshank and a good-sized pod of c.20 Common Dolphins in Loch Gruinart from the Killinallan side.

Phil Edwards spent much of the day on Jura where he had a total of 5 Otters amongst other good sightings. On the way there he took this lovely sunrise photo near Blackrock where he noted 33 pale-bellied Brent Geese. 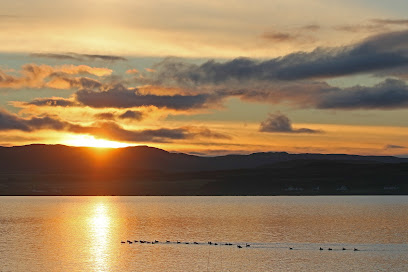