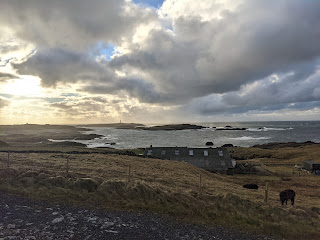 Lovely gift of a day after so much wind. plenty of birds on the wing making up for being stuck in shelter for the past wee while. No photos today, I was too busy enjoying the weather.  Photo above taken yesterday looking over to the Rhinns lighthouse.

Margaret has been in touch from Kilchoman Reserve with an eagle day - a white-tailed eagle flew by the house and then spent some time over Machir bay, and earlier she had a good sighting of an golden eagle sitting close to the road at the hut circles 'An Sidhean' near Culbuie. These were once believed to be fairy mounds and children were forbidden to play near them lest they be taken by the 'wee folk'.

"Good day today with the finding of a drake American Wigeon off the Gaelic Centre, Bowmore in amongst several hundred Eurasians.
Also White-tailed Eagle from here, plus a Pink-footed Goose & again the juvenile Glaucous Gull.
The juv Iceland Gull true to form this morning flew SW at Bowmore along the shore, but earlier at 8.15am and landing just below the distillery.
At Bunnahabhain a flock of 40 Redpolls were in out of the birch and conifers, 2 paler birds were poss Mealy types, but the whole flock was furtive and they never gave more than a few seconds to study them properly.
Mid-late afternoon from the Killinallan road, the Cackling Goose was present just South of Gruinart with 2000 Barnacles. There were 3 Greenshank, 3 Grey Plover, 20+Knot, a young Peregrine,  a ringtail Hen Harrier & 2 WT Eagles sitting on the deck trying to catch a stranded fish in a pool but without success!
As per Steve Lister & Ken Reeves - Loch Skerrols the 1cy drake Lesser Scaup still present & a Long-tailed Duck."
Thank you Chris,
Posted by Islay Birding at 22:44