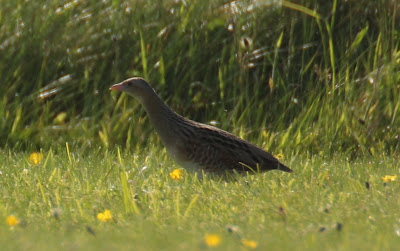 An image taken last week by a visitor of the "noisy one", out in broad daylight, the cheek of it having the nerve to break cover.... Michal had been out last night and had heard 5 Corncrakes calling in the Ballygrant area. While he was out he also saw a Tawny Owl and also 2 Barn Owls, one near to Loch Skerrols, the other at Bunnahabhain. He also heard 5 Snipe drumming as well as 15 Grasshopper Warblers on his travels. Mary, this morning saw the Magpie down outside the hall at Portnahaven. Later on this morning, Michal had seen an Osprey flying over from Loch Laingeadail towards Ardnave Loch.
Posted by Ian Brooke at 20:30