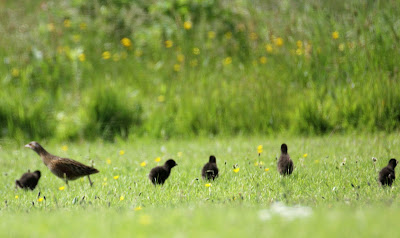 An image given to me tonight by Len Eades who has been over on Islay for the past fortnight. He saw the Corncrake out with her 12 youngsters, he took it through the kitchen window rather than going outside and disturbing them all... Other visitors who have kindly sent images and sightings over the last 3 weeks are Gordon & Pauline Yates who left to go home this afternoon. Another pair of visitors had been up at Ardnave today and had a male Hen Harrier, very low over the shore. Offshore there were Gannets, Eiders and Terns. Off Nave Island there were hundreds of Greylags, could they be there to moult? In the dunes they counted 32 Chough. They had also seen a pair of Shelduck with 6 young. The Mute Swan family was still present at Ardnave, and a Redshank was seen calling her 4 young away from the waters' edge. On the road between RSPB Loch Gruinart and Loch Gorm, a male Stonechat was present, and also a female a little further on. Down near to the Coastguards cottages, the Curlew and 2 young were still to be seen. Peter has seen 12- 15 Gannets fishing close to the pier at Bruichladdich, along with a few Arctic Terns. Today he had a Fulmar too, a bird that he does not see that often so far up Loch Indaal.
Posted by Ian Brooke at 21:01