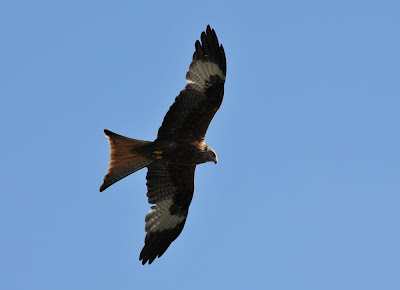 This is the image that I was trying to upload for last night's entry when things went all wrong. It was taken by Armin Grewe from where he lives down in Berkshire, so this is not an Islay Red Kite!
An Osprey was seen in at Loch Skerrols today, could this be the same bird that was seen the other weekend over Loch Indaal? We had one here a few summers ago and it was seen quite often through the summer at different locations. Today, James had a Stonechat while he was out round Loch Gorm. There were 14 Whimbrel at Ballinaby and he had 2 separate male Hen Harriers and also a Peregrine. In the gravel pit at Ballinaby there was strong activity by Sand Martins with around 100 nest sites being looked at. James commented on the low numbers of Stonechats compared with other years. 7 Barnacle Geese were seen on the reserve at Gruinart today, and the single Barnie is still to be seen at Ballinaby, no doubt with some Greylags!
Posted by Ian Brooke at 19:24