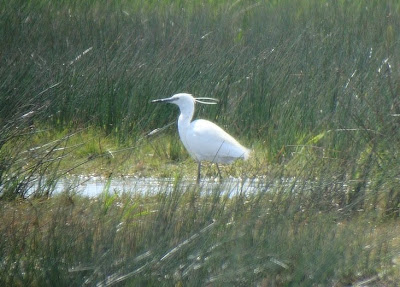 Another of the images from Andy Robinson, this time of the Little Egret that was out in front of the hide last week. Other folk who sent entries through recently included Gordon & Pauline Yates, Dot & Andy Street and also John Forbes from Whitley Bay, many thanks to you all for your input.
Peter Roberts who had his friend George over from USA for a few days had a great 4 days and saw 107 different species including a Purple Sandpiper in summer plumage at Bruichladdich on Thursday. The Brent Goose was seen at Bowmore. Claggain Bay held a male Goosander along with 2 females in the sea close offshore. Woodcock were roding at dusk at Bridgend woods earlier in the week. Yes, George did get his sighting of a Grasshopper Warbler! Yesterday afternoon, before George left, they had fantastic sighting of a dog Otter at the yatch marina in Port Ellen Harbour, both far off and also close at hand. It stayed for ages and kept coming up with butterfish!
This morning Bob and Martin had taken a walk out from Bowmore along "The Battery" towards Gartbreck and they saw the following, 1 Knot, 1 Grey Plover, 50 Bar tailed Godwit, 6 Whimbrel, 10 Curlew, 250 Ringed Plover, 300 Dunlin, 50 Oystercatcher, 2 Redshank and a drake Shoveler. This was the first time that Bob has had a Shoveler there this year.
Posted by Ian Brooke at 19:13