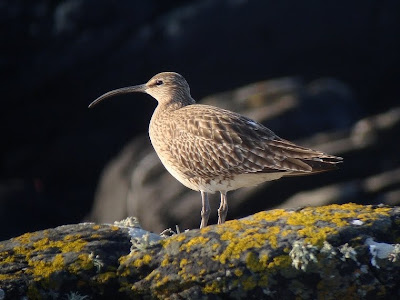 Another of Andy Robinson's images taken the other week when he was over. I do not think he would have the same image in sunlight today, as it has been rather miserable to put it politely with just a "wetting rain" for most of the day, not a lot, but....The birders that came in to the cottages were well pleased yesterday, as when I was speaking with them outside their cottage, a Corncrake was heard and then a Chough flew overhead, right on cue! Hope the Corncrake did not keep them awake, at least the Cuckoo is quiet. George had seen a White tailed Sea Eagle over at Bunnahabhain today and also 2 different male Hen Harriers over that way too. Back at home, down at the pier George had a Great Nothern Diver close in, 2 Arctic Terns over the water, 2 Common Terns were on the pier itself, while further round at the top of Loch Indaal, he had 2 Little Terns. A visitor had told George of hearing a Corncrake on the way up to Sanaigmore the other day, while off Coul Point they had seen 30 Manx Shearwaters, 1 Bonxie, 3 Arctic Terns. Further round the headland, they had seen some Guillemot and 40 Razorbill.