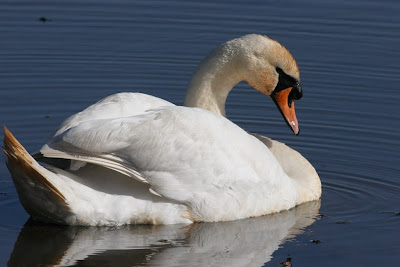 A Mute Swan taken by Carl. Today Carl had seen 3 Chough down on the Uiskentuie strand, at Blackrock there was a charm of Goldfinches, while at Gartmain there were 50 Oystercatcher and 10 Mute swan. Later on on his way home, Carl had 5 Curlew and a Common sandpiper at Gortan.
Down the rocks on the foreshore below George's house at Bruichladdich, George counted 72 Common Gulls, of which only 6 were young birds. He also had 12 Redshank there too.
Bob reported in to say that he had seen 3 young Hen Harriers on the wing when he was out the other day. He also had a count of 300 Greylag Geese over on Nave Island.
Coming back home this evening, and there were a pair of Roe deer just after Sunderland, and just before Rockside were 12 Pied wagtails.
Posted by Ian Brooke at 20:45