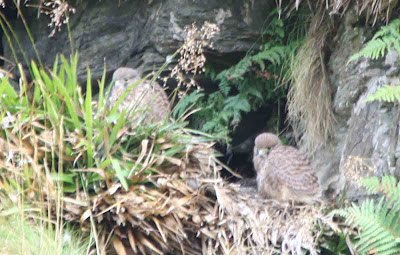 A couple of young Kestrel fledglings taken the other day while we were out on the Rhinns, and only found purely by accident!
This morning there was a raft of Greylag Geese on Loch Gorm, we counted 87 in total, and within them there were several family groups to be seen.
George had been over at The Gaelic College, just outside Bowmore and had seen over 30 Terns as well as a few fledged Black headed Gulls on the wing too.
Posted by Ian Brooke at 18:51