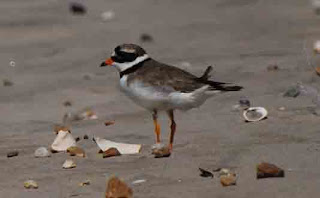 Michal had been out at the weekend on one of his walkabouts and had been over on the shore at Killinallan and followed it round to Gortantaoid, and managed to get this Ringed Plover en route. Michal commented that bird wise, things were a bit quieter, as obviously the breeding season is now past, although he did see and hear Pipits, Skylark, Stonechats, the odd Hoodie Crow and a few Herring Gulls. MS

Here at home, later on Sunday evening there were 73 House Martins and Swallows on the 'phone wires, but on Tuesday, there were certainly not so many to be seen, so that could possibly have been the first of them moving South. Round Loch Gorm we counted 253 Greylag, in 5 different sites, with 134 on silage aftermath at Rockside. Down below the coal yard at the head of Loch Indaal there were 2 Turnstone. Flying South towards Bruichladdich was a group of around 20 Knot, while on the rocks there were 40 Eider mainly in eclipse plumage. MAB