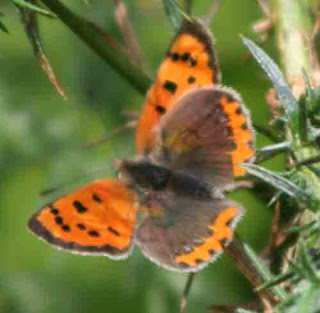 After a dull start to the day, the sun came out, which turned out a good omen for Michael Coppleston who was leading a Butterfly walk at Loch Gruinart at midday. Around a dozen folk came along, and an interesting time was had by all those who attended.
Species seen were Small Copper, Small Heath, Cinnabar Moth, Green veined White, Scalloped Hazel and White Ermine. A visitor brought along a Pus Moth and also a Buff tip which he had caught in his moth trap on Tuesday night where he was staying. If memory serves me right, the image is that of a Small Copper.
There was a Grey Wagtail on the burn down beside the Coastguard House here at Kilchoman this morning, while there was a sighting of a Moorhen on a pool beside Loch Gorm. Moorhen are not so common as they once were here on the island. IKB
Posted by Ian Brooke at 06:21