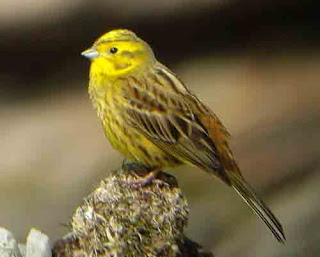 This image was one of a pair of Yellowhammer, that was taken here on Islay today by Michal while out over at Gortontoid. As well as the Yellowhammer, he had a Common Sandpiper on the rocky foreshore and then later on he was fortunate to see an Otter. He also had a Peregrine Falcon and over the dunes at Gortontoid Point, there were 7 Sand Martin. There was also an adder out sunning itself! MS
There was a phone call in to Margaret today of a Hoopoe, that was seen over at Coal Ila on Sunday and Monday, but it has not been seen since. This is the first Hoopoe on Islay for a few years.
Yesterday afternoon, James had the Green winged Teal and 23 Black tailed Godwit as well as a Stoat on the reserve at Loch Gruinart. Today he had 2 Redpoll, 3 Whitethroats, 9 Grasshopper Warbler and 3 Water Rail. James also reported in to say that he had seen a lot of Drinker Moth caterpillars. JRH
Posted by Ian Brooke at 19:58