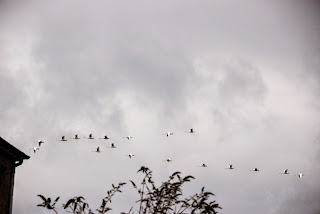 David Livingstone kindly sent this image that he had taken earlier this week of some Whoopers flying over Port Ellen. Teresa Morris yesterday had a count of 52 Whoopers flying South out past Saligo. She also had a flock of 28 Chough in the same area too. Back at Craigens, Teresa had 86 Pale bellied Brent being pushed in by the incoming tide. She also had 42 Curlews and 50 Oystercatchers there as well. Today, Louise had a count of 120 Blackbirds all together at Gatehouse on Jura where a White tailed Sea Eagle, a Kestrel and 2 Buzzards, not a bad start to the day! On the North side of Loch Gorm, Ballinaby side, Louise had a flock of 230 Golden Plover and also a Golden Eagle also present! Today on the guided walk at Gruinart, Emily's pick included 4 Pink footed Geese, pr of Bullfinches, Treecreeper, Merlin, Sparrowhawk and Stonechat. Mary had a count of 39 Pinkfeet, 96 Brents, 1 Canada, 12 Whitefronts, 161 Greylags and 5032 Barnies. The count would have been greater but 2 overflying jets spooked the geese before Mary had completed her count... She also commented in seeing more geese arriving through the day as well. Bob had been out and about today. He had 6 Fieldfare at Glenmor behind Port Charlotte. Over Bun an Uillt he had 10 Red breasted Merganser, 5 Redshank and a Greenshank. Up at Killinallan a female Kestrel, 2 Wheatear, 1 White Wagtail along with 6 Pied Wagtail were present. Back down at Craigens, a Grey Wagtail, 2 Mistle Thrushes along with "lots" of Reed Buntings. Over on Loch Skerrols, 3 Dabchicks, 1 Moorhen and 20 Whitefronts amongst the Greylags there. Finally at Gartmain there were 15 Pale bellied Brent and 520 Wigeon. Here at home, we had the sighting of 2 distant Golden Eagles, a good spot with the scope, well done Margaret! Another day out in the garden in the shirt sleeves, not bad for October!!!
Posted by Ian Brooke at 12:47