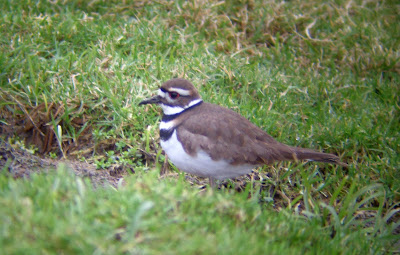 Here it is then, the Kildeer Plover in it's glory on Islay, "the best bird so far this year in Scotland". That is what I was told from a person in the know... It has not been seen today, but it has been heard calling...
As we are into another month now, the tally for January's rainfall came to 3.5".
Bob had been round Ardnave Point the other afternoon, and had 45 species in around 2 hours, not bad going. He had a count of 80 Chough, 2 Peregrine Falcons, 1 Kestrel, 1 Black throated Diver towards Nave Island, 8 Ringed Plover and only 1 Skylark.
Posted by Ian Brooke at 19:44