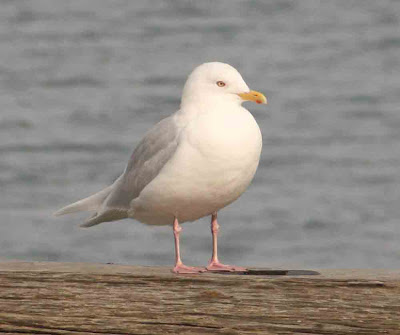 Another image of the Iceland Gull taken up at Bunnahabhain taken by our friends. They also had a good sighting of a male Hen Harrier out on the wing over some gorse bushes on the "High road".
The visitors from Orkney had seen a pair of Golden Eagle while they were out, also a Kestrel as well as another male Hen Harrier in a completely different location. They had seen some of the Pale bellied Brent Geese on Loch Indaal, just North of Bruichladdich.
The wind outside tonight has fairly picked up!
Posted by Ian Brooke at 21:19