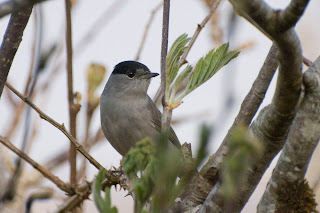 This male Blackcap was caught in camera by Michal today, it had been there for a few days, but his perseverance paid dividends!
A phone message from Louise on Jura earlier on saying that there have been 43 Pale bellied Brent Geese in the bay at Craighouse, just below the shop. Another piece of news was that a dead Golden Eagle had been found in Pig Bay right up at the top of the Northern tip of Jura. It had a ring on its leg, and turned out to be have been rung back in 1987, so probably had died of old age rather than anything else. LG
James reported in to say that he had seen 52 Black tailed Godwits this morning on the floods, while at Bruichladdich he had an Arctic Tern. Coming home this afternoon, he commented that the salt marsh at the head of Loch Gruinart was covered with numerous Golden Plover, Ringed Plover and Dunlin, but was unable to get an accurate count as he did not have his 'scope with him at the time. He had been told this afternoon that there had been 4 Dotterel seen in a ploughed field over at Upper Killeyan on the Oa yesterday. JRH
Another visiting birder, over for a few days, left a message to say that he had seen his first Common Sandpiper of the year at Port Charlotte today, and had heard a Grasshopper Warbler over at Loch Tallant, while at the top of Loch Indaal there were 53 Black tailed Godwits. Were these possibly the same birds that James had seen too?
Posted by Ian Brooke at 20:20