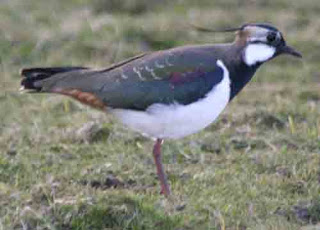 This lapwing was seen leaning into the wind up at Ardnave Loch today. There was around another 50 birds in flight above it but this one preferred to be down on the ground! Also at Ardnave Loch this afternoon were 18 Whooper Swan and 2 Mute Swan, and a Sparrowhawk was over the dunes. There were still 47 Whoopers to be seen down on the floods at RSPB Loch Gruinart reserve. IKB
Mick Durham, a visiting wildlife photographer, kindly gave me some of his sightings today. A Golden Eagle was close at hand down beside Loch Gorm earlier this morning while a walk round Ardnave Point this afternoon gave 12 Ringed Plover and 14 Purple Sandpiper beside the Lobster Pots. Over Nave Sound, there was a single Gannet, and a Great Northern Diver in the water. There was a further Great Northern Diver at the mouth of Loch Gruinart. The cold Northerly winds continue, having a tattering effect on any flowering Daffodils that are out.
Posted by Ian Brooke at 19:49