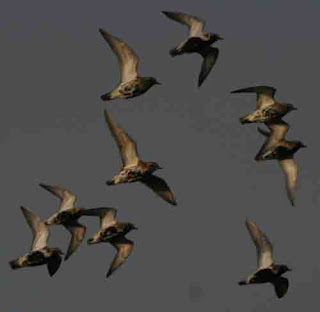 These are just a few of the Golden Plover in flight, taken this evening, down at the ploughed field at the Coastguard Houses. The whole flock got up, what startled them I do not know, but they were an impressive sight as they flew around before coming back into land. I saw my first Wheatear of the year down at Machir Bay, infact there were 3 there in total. As we headed back to our car there was a group of 15 Chough flying overhead. Back at home, this morning Margaret saw the pair of Shelduck having a look at their nest site, we wonder if they are the same pair that were on "Springwatch" last year! IKB
Yesterday, after the heavy rain at lunchtime, James had 97 Sanderling in one flock, along with 1 Knot and 6 Grey Plover at the head of Loch Gruinart.
Donald James MacPhee reported to James that he had seen a White tailed Sea Eagle with yellow wing tags on Friday, was it the same bird that James and Andy had the other day at Loch Gruinart? We believe that the yellow wing tags are birds that were born in 2006, but I am waiting for conformation that this is correct. DJ's bird had the letter "P" , while neither James or Andy could not see any lettering on the tags on their bird as it was further away. JRH
Posted by Ian Brooke at 20:00