Late yesterday afternoon, Mandy had seen a Kestrel down close to McNicol's croft.
This morning, Gary had seen 6 Barnacle Geese down at the top of Loch Indaal while he was having a look see while parked at the entrance to Whin Park. Louise had a Starling on her feeders this morning, a first for the Gatehouse list.. At the manse at Craighouse, Louise had seen a Sparrowhawk. Later on, she saw a Merlin and then a Hen Harrier up behind Ballinaby. Bob, this afternoon, saw a Little Gull among some Black headed Gulls at Carnain. The BTO sent more details about the Greylag goose that Bob had been handed in to him. It was initially caught and rung back on 12th of December in 2012 over at Ballinaby.
Here at home, a quick bird watch after tea produced 2 Buzzards, a Peregrine, a Sparrowhawk, 2 Raven and around 30 Chough. 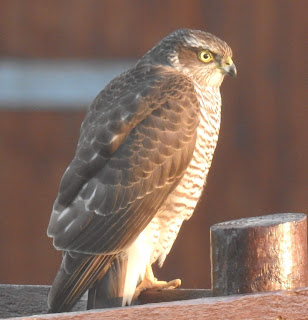 Yet another image of our very local Sparrowhawk, taken in the evening sun, through the kitchen window, earlier this evening...
Posted by Ian Brooke at 12:01