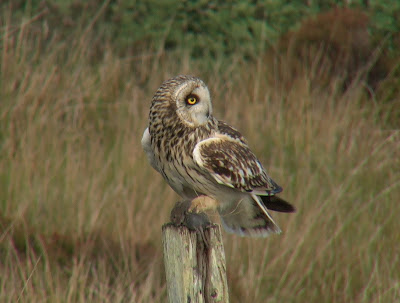 A Short eared Owl caught on camera this morning along with it's prey. Later on today the same visitors had counted 54 House Sparrows in a group down at Claddach at Portnahaven. Mark & Sally, other birders here on holiday, had seen Crossbills over at Loch Allan this afternoon. Over at Loch Gruinart, James had 5 Common Terns and a single Barnie. On the reserve itself he had a count of 4 Hen Harriers too. Peter had seen his 1st Islay Swift of the year up at Sanaigmore and also heard a Corncrake calling there too. Closer to his home at Bruichladdich, he had 2 different Arctic Tern colonies, one of 3 pairs and the other with 4 pairs. We too had seen 3 pairs past the spit at Uiskentuie, they were all in the air as folk walking their dogs went past unaware of any possible nest sites around.
Posted by Ian Brooke at 13:11