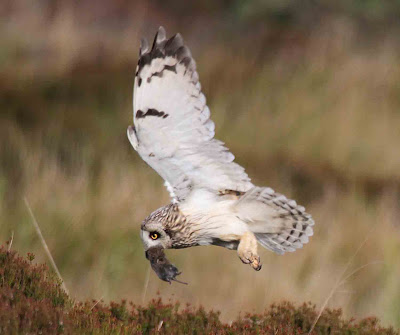 Another great image set through from folk over here on holiday. I do not think it was taken today as the weather was not too nice, certainly not a day for clipping the sheep as that was what I had planned to do but.... Net result was that it was not up to much for the birds either! Needless to say Michal was out first thing before the weather broke down. Up on Ardnave Loch he had the pair of Mute Swans plus their 4 cygnets, as well as the Whooper Swan. Down at Toyovullin he had a count of 73 Oystercatchers, and on the coastline towards Garra Eallabus there were several pairs of "angry" Oystercatchers, no doubt try to fend off any intruders from their young. Yesterday, Michal had a count of 56 Grey seals, 36 Arctic Terns and 3 Little Terns over on Nave Island. Visitors had seen a Curlew plus 2 youngsters on the newly cut and cleared grass silage fields at Rockside.
Posted by Ian Brooke at 11:40