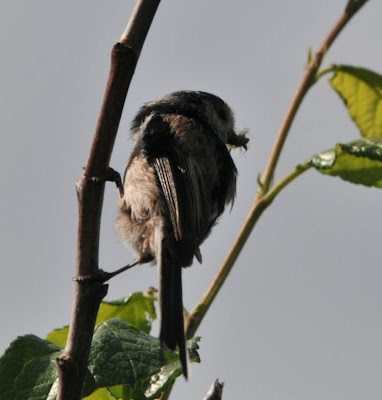 This image of a Log tailed Tit was sent through today from Steve Ash from Wallingford in Oxfordshire who was over here birding in March. He admits that he is jealous of us having Corncrakes calling as they do. We had a great one today Steve, not far from where we were standing when we were on the guided walk at Gruinart, needless to say we never saw it... Michal was out on the prowl at the back of 5 am this morning up at Ardnave, he had a good variety of waders over at the "lobster pools", 80 Dunlin, 30 Ringed Plover, 20 Sanderling, 10 Bar tailed Godwit, 20 Turnstone and 20 Oystercatcher. There was also a flock of 30 Whimbrel round Ardnave Loch itself. About 40 Gannets were fishing at the mouth of Loch Gruinart, 2 Little Terns and 15 Arctic Terns were also seen. Back on land and on the reseeded field beside Ardnave Farm, 57 Greylags were counted! Yesterday evening Bob and Martin had seen 2 Wood Sandpipers out in front of the hide, difficult to find but certainly there! Bob also heard a Greenshank, and on their way home they had a couple of Whinchats and also a male Hen Harrier down at Foreland. Along at Rockside in one of the barley fields 11 Hares were seen and the Barnacle Goose was still round at Ballinaby along with 12 Greylags.
Posted by Ian Brooke at 10:13