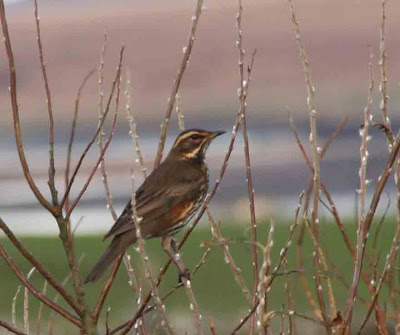 This Redwing was caught in camera this afternoon below James's house at Grainel. I was on the lookout for the 3 Yellowhammer that were close by earlier on, but no luck! James had counted 365 Golden Plover and 520 Lapwing resting up on the mud on Loch Gruinart shortly afterwards, and the Green winged Teal was seen on the floods today by one of the vols.
Malcolm had 13 Pink footed Geese at Rockside while carrying out the goose count round Loch Gorm. They were in 3 different groups, rather than all together.
Several different groups of Whoopers have been seen today, the largest in number being 35 flying down Loch Indaal around 15.30, seen by Malcolm's wife, Carol. These were possibly the same birds that were seen earlier, on Ardnave Loch at lunchtime.
Posted by Ian Brooke at 20:24