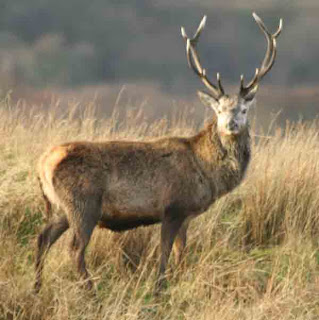 Over at R.S.P.B. Gruinart Reserve there were 67 Twite, a high count, normally only in single figures. J.R.H.
A trip to the south east of the island produced several good sightings of Red Deer stags close to the road, a few Fallow and Roe deer were also seen. On the bird front some Long Tailed Tits were seen in the woodland at Kildalton, 2 male Goosanders were at Claggain Bay along with a Great Northern Diver was also present. On the way back to Port Ellen, a Golden Eagle was seen soaring over the hills and a Sparrowhawk flew across the road in the woodlands. On returning to Kilchoman, 2 Buzzards and another Golden Eagle were soaring over the cragg. On the lochans there were 8 Whooper Swans. M.A.B.
The Yellowhammer is still present on the R.S.P.B. Oa Reserve. A.K.
Posted by Ian Brooke at 17:03