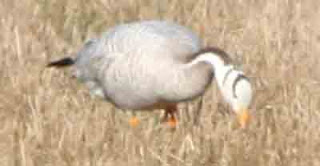 Yes, the Bar headed Goose ( or the Braehead Goose as some call it), that was initially seen back on the 8th of October has been spotted again today, Thursday. It was in amongst a field of around 2,000 Barnacle Geese over at Cornabus at Port Ellen, grazing away quite contentedly! It was good to hear that it was still around as I had recently asked through the blog if anyone had seen it lately. The last sighting was at Finlaggan by Steve Percival at the end of October, so where has it been for the last 2 months? Also seen yesterday were the Crossbills , 1 Red and 3 Green, over at Avonvogie in the Pine trees, only 4 this time whereas there were 5 earlier on in early November, or were they different birds? MAO
The Goose count at RSPB Loch Gruinart reserve on Tuesday, gave us the following figures, 6,059 Barnacle Geese and 412 Whitefronts which is a high figure for the reserve. Also seen were 31 Meadow Pipit, 76 Sanderling (another high count), 1 Sparrowhawk and a single Black tailed Godwit. 4 Hen Harriers were also seen on Monday, while this afternoon there were 2 Greenshank down at the hide, and 20 Twite were noted, again a high figure for the reserve. JRH
A Short eared Owl was seen over the moorland at Gruinart, a late bird as they are not normally here at this time of year. A Golden Eagle and a female Hen Harrier was also also noted at the same time as was a single Jack Snipe. CF
I have just received a copy of "Birds of Argyll" written by the Argyll Bird Club, a well written book by several contributors which will keep me reading for a wee while. IKB
Posted by Ian Brooke at 17:29

The Bar headed goose is still happily munching away in the Cornabus valley, right below the house!

Thanks for that Dave, did not come your side of Port Ellen this afternoon... Ian