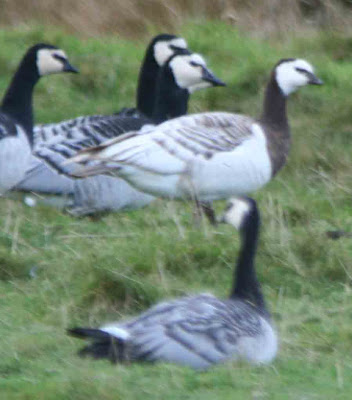 Here is the leucistic Barnacle Goose which we took the other day down towards Bridgend. When we initially saw it, it had its head down eating grass and was more in the middle of the group, but was noticably a lighter coloured goose than its mates.
There were also 55 Lapwing flying along the shoreline over at Bruichladdich.
The story of the 2 House Martin fledglings sharing a nest with 4 Swallow has made the press with Margaret winning the star letter prize ,"In your garden" section, of the December edition of Bird Watching. The birds will again benefit as the prize is bird food, rather than another set of bins!
On Tuesday, there was a Fulmar in wheeling around in front of the crag, so look out for some stormy weather later this week, say probably Friday or Saturday. Over the last few winters I have noticed this pattern, does the Met Office know about this? IKB
A Pink footed Goose was amongst other geese around Loch Skerrols last week. MS
Also on the whole Islay picture, there have been numerous sightings of Sea Eagles this month, no doubt immature birds from Mull on a day trip over here. If anyone has seen any Sea Eagles over here, could they please let me know, and I will pass it on. AK
Here are some sightings from Jura for the last week, within a 200m stretch of road at Ardfin there were 2 Hen Harrier, Sparrowhawk, Buzzard and a Kestrel! There are a lot of Mergansers to be seen in the bay at Craighouse. Suicidal Woodcock on the go, as 14 were counted between Craighouse and Gatehouse (home) last Tuesday evening. Back on Islay, there was a flock of 20+ goldfinches sitting on a roof in Bowmore. LG
Posted by Ian Brooke at 09:10

I vaguely remember the weather forecast on BBC Radio 4 this morning mentioning something about strong winds and rain on Sunday.

So the Fulmar indicator seems to work.