Good friend Armin Grewe sent me through the following e mail last night... Armin often visits Islay, but not so far this year...


"This morning I noticed a pair of Tufted Ducks during my walk along the canal. While I've seen them on some lakes around here regularly they're fairly uncommon on the canal, where it's mostly Mallards.

Yesterday morning I watched a horse chasing three pairs of Canada Geese on its paddock. When I passed again half an hour later on the return leg the geese were gone, so seems the horse was the winner.

Last Saturday I saw two Pigeons chase a Magpie, first time I think I've seen that happening. Not sure what the Magpie did to cause the chase, they suddenly flew across the path as I was approaching home.

On Easter Monday I saw the first duck with its ducklings for this season, unfortunately haven't seen it since. A few days ago I saw a lone duckling in small stream next to the canal, not sure where mother was or if it was the same family as this was about a mile up the canal.

A few weeks ago on my way to my weekly shop I noticed some roadkill (couldn't make out what it was) on the A4. More interestingly on my way back an hour later I watched a Red Kite unsuccessfully trying to pick it up, it got disturbed by an approaching car. May be it was more successful on a later attempt? (I had to drive on, so couldn't watch if it made another attempt)

Most mornings during my walk I say good morning to the rare Roof Duck (see picture). It's keeping a watchful eye over the canal below the roof where it lives. Sometimes the female comes out as well, but most of the time it's just the male. 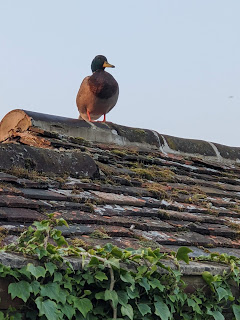 Also a few weeks ago a pair of Long Tailed Tits visited me at my fake balcony, I think only the third or fourth time since I live here that I've seen some at my flat. I usually only see Blue Tits and Great Tits from the flat, so that was a welcome change. One even seemed to want to come in, it landed on the railing and then lightly flew against the door.

Other than the birds I've seen a Muntjac and a Roe Deer on the "fenced off" section of the towpath (some old gravel pits on the other side, fence was put in for safety reasons a few years back).