Yesterday, Gary had seen a White tailed Eagle fly over Keills and then up towards Bunnahabhain, he saw a pair of Bullfinches. Yesterday We saw a Red legged Partridge on our way to Bunnahabhain just after Ardnahoe. Today, Gary had been out with clients. They saw a male Hen Harrier at Finlaggan, later on, a ringtail was seen up towards Ardnave. At Ardnave Loch, they saw 4 Black tailed Godwits in summer plumage and while going over the Glen road 2 Swifts were spotted. Here at home on the feeders, earlier on, an adult Greenfinch plus 3 youngsters, proof that they must have bred!!! 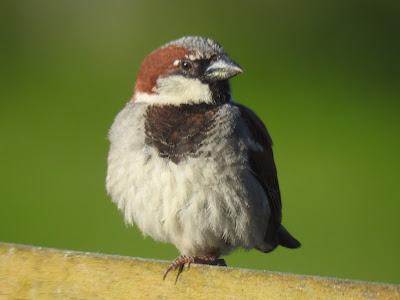 One of the House Sparrows out behind the garage yesterday morning..
Posted by Ian Brooke at 12:03